In many ways the $2,059Pērkons seems like the drum machine sibling of Erica Synths’ SYNTRX. It’s not just that they share a chassis and knobs. But they’re both pricey, niche instruments that focus on having a unique character, rather than cramming in as many features as possible. But, while they’re both compelling yet impractical devices, that’s where the similarities end.

Talking about using Pērkons is going to get very complicated, very quickly. So let’s ease into things by talking straight specs. It’s a four-voice digital drum machine with multiple different sound engines and algorithms per track, paired with analog multimode filters and drive. There are four 16-step sequencer tracks with four different shuffle algorithms, ratchets and probability settings. In addition to a master output, headphone output and master send and return effect jacks, there are also individual outputs for each voice, along with separate sends and returns and trigger inputs for each, not to mention MIDI In and Out. Plus an analog bucket brigade delay (BBD), an optical compressor and an LFO.

In short, there’s a lot of sound shaping power here. Sure, it doesn’t have microtiming, and you have to chain multiple patterns together if you want to have more than 16 steps, but there’s still a decent number of features to take advantage of.

The four voices don’t have prescriptive uses, but some are better for certain sounds than others. And each has a unique set of engines with multiple modes. For instance, voice one has a wavefold drum, a wavetable drum and a simple drum algorithm. The mode switch then chooses between three different transients for the fold drum, three different wavetables or three different simple waveshapes depending on the algorithm chosen. And each algorithm has different controls assigned to the parameter one and two knobs.

This basic setup is spread across all four voices, just with different algorithm options. So while voice one and two work better for kicks and toms, voice three is your best bet for claps and snares, and voice four is ideal for high hats and cymbals.

I feel like it’s important to pause here and point out that, while I may say things like “best for snares,” these are not typical drum sounds. Don’t come to Pērkons expecting 808 kick — you’re not gonna get them. But, that’s part of its appeal. It doesn’t sound like other drum machines and it oozes character. That’s quite refreshing in an age of countless clones and rehashes that simply try to repackage beloved sounds of the past.

That character and unique timbre might put some people off, though. Even I initially was underwhelmed with what I was coaxing out of the Pērkons my first couple of days with it. But once I stopped trying to bend it to my will, and simply let it do what it was designed to, I came around pretty quickly. Those sounds are decidedly digital and err towards the aggressive end of things. Do you dig ‘90s industrial music? You’re gonna like Pērkons. Digital hardcore? Have I got the drum synth for you. 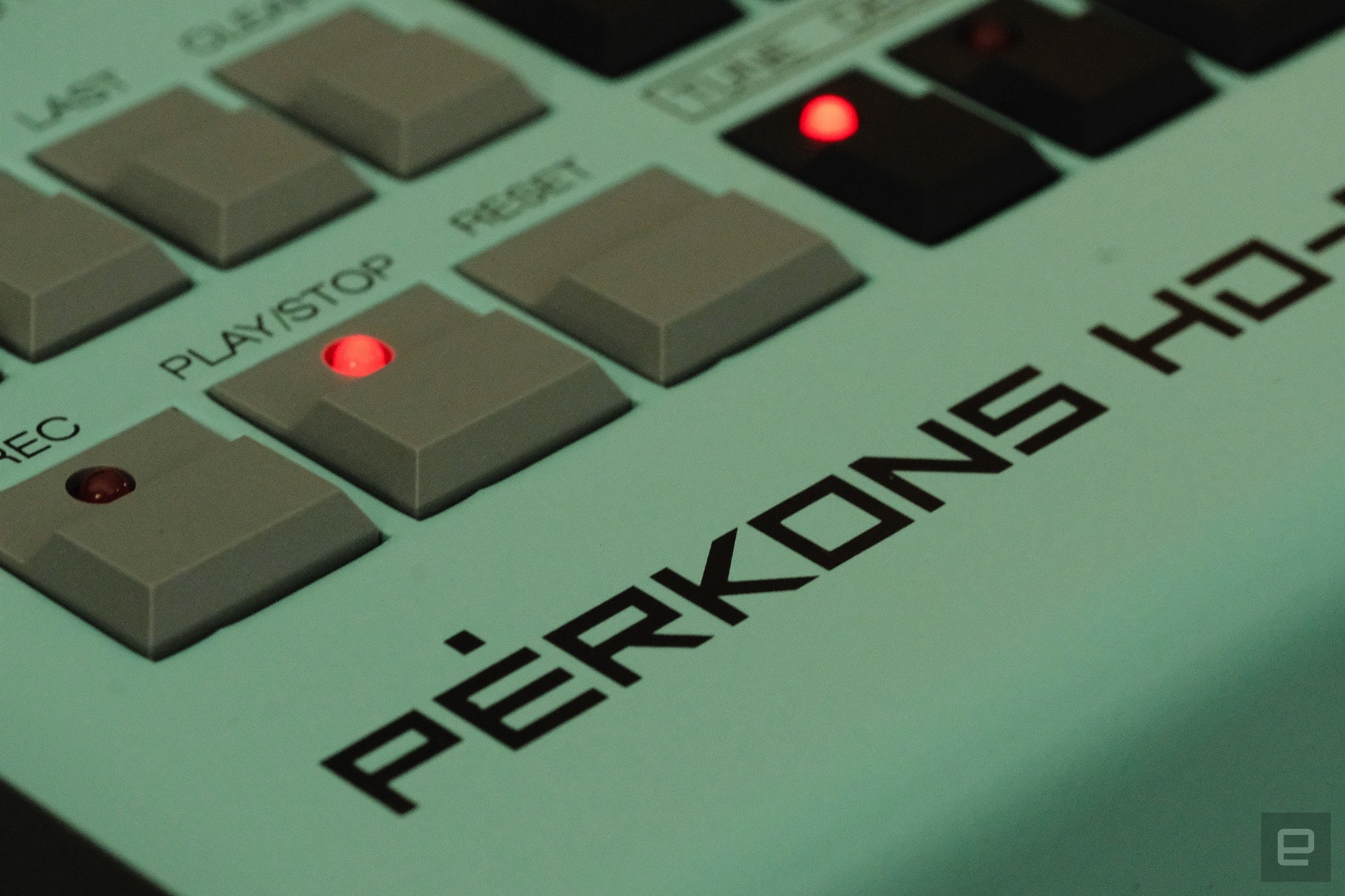 In fact, after years of mostly making more laidback and ambient styles of electronic music, I found myself dialing in harsh, blown-out guitar tones, a la Nine Inch NailsBroken to jam along with Pērkons. I was transported back to my high school days of black t-shirts and long greasy hair. And I wasn’t mad about it.

The one tip I have is, keep that drive knob pinned and be generous with the compressor. I think part of why I was a bit lukewarm on it at first was because I was trying to be subtle and judicious with dialing in those effects. Which, frankly, it was probably pretty stupid of me to expect subtlety from a drum machine named after the Baltic god of thunder.

Once you accept the sound palette at your disposal, you have to come to grips with the technical functions of Pērkons. This is where things can get a little messy. While programming in a basic 16-step drum pattern and playing it back is relatively simple, some of the more advanced functions aren’t always that intuitive. At least at first, I’d highly recommend keeping the manual handy. Even if just to reference what the parameter knobs are controlling for each voice mode.

The Pērkons is decidedly old school in its approach to interface design. There’s no screen or menus to dive through. Instead, almost all of the machine’s functions from the sequencer playback mode, to the shuffle percentage to the LFO target, are controlled via the 64 step buttons or four trigger buttons. This means that basically anything beyond simply inputting individual drum hits requires pressing some combination of two or three buttons simultaneously.

For example, if you want to set the probability that a particular step will play you have to hold down the step you want to change, the probability key and one of the four trigger buttons to select a percentage (10, 25, 50 or 90 percent). The benefit is that, since you don’t have to do any menu diving, it’s simple to manipulate a pattern while it’s playing. And once you figure out the basics of how the interface works, it’s pretty easy to grasp since everything is labeled. The downside is that some things have relatively limited options, like probability. If you want to have a step to have a 33 or 75 percent chance of playing, you’re out of luck. Similarly, shuffle is in predetermined percentages, though those aren’t labeled.

You also have to be careful to hit the buttons you want in the right order. If you press the pattern / ratchet button before you start holding down a particular step, then you’re not going to add a ratchet, you’re going to change patterns. And if you haven’t saved the one you were currently working on, it will be gone for good. Pērkons can be fun, but it can also be very unforgiving.

Even though the interface is old school, Pērkons does have a number of new-school features to help keep it from being too robotic. In addition to shuffle and probability, you can change the length, add accents, multiply or divide the tempo, select one of four “grooves” and choose one of four different playback modes: forward, backward, ping-pong or random. And each of these can be done on a per-track basis. So you can make track four only 13 steps long and ping-pong from beginning to end and back at half speed, while track one plays at double speed with a 50-percent shuffle and track two has a unique groove but is only eight steps long. 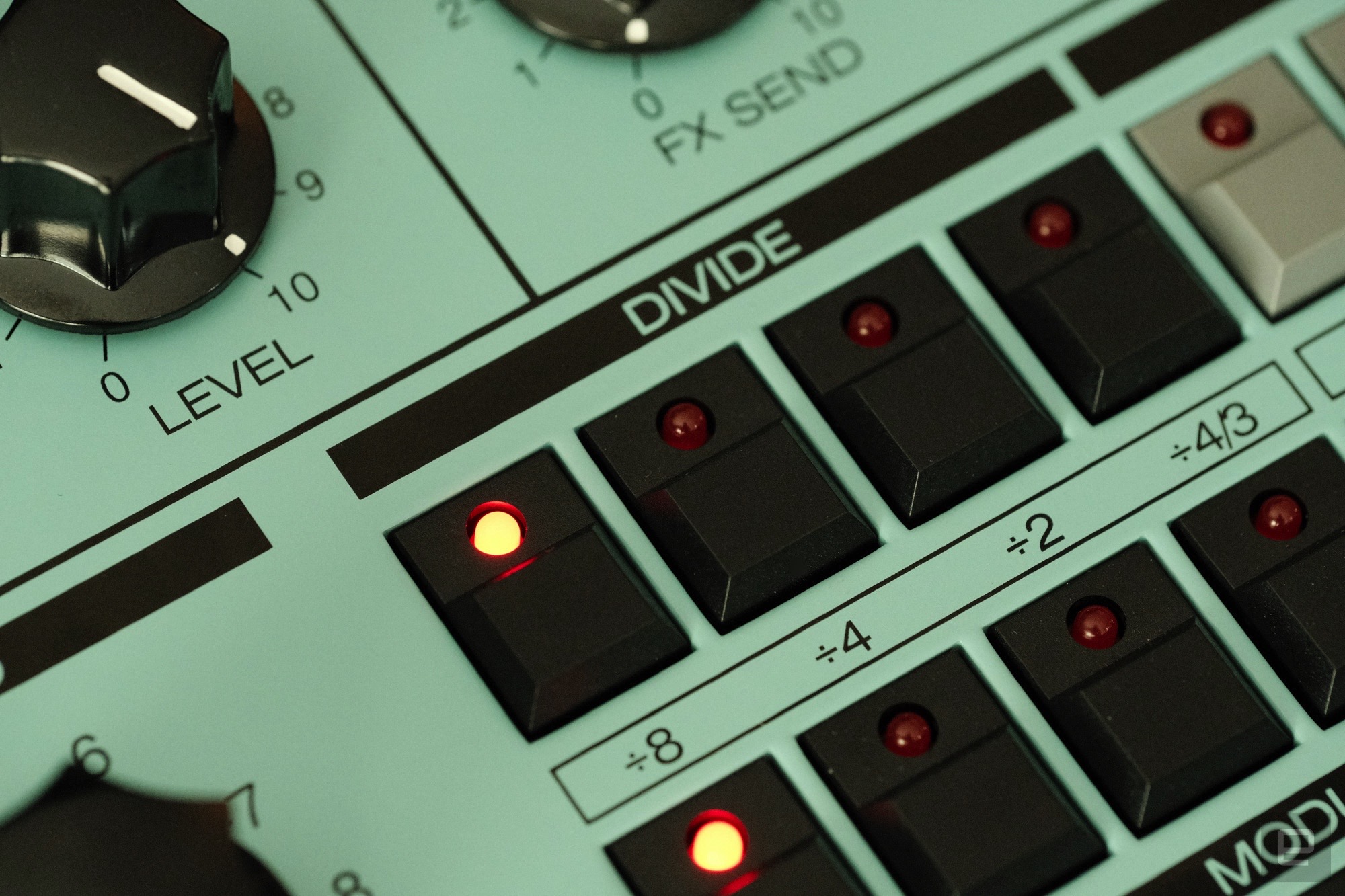 All of these options are welcome, but can feel a bit unwieldy to manage at times. The lack of a robust menu system is both a gift and a curse. While it keeps everything at your fingertips, it also means you have to remember a bunch of button combinations to change or review settings.

Another thing worth discussing is that, while Pērkons is primarily a drum machine, it’s also a synthesizer. But, don’t expect to plug in a keyboard and play funky basslines. Instead, it’s best approached as a drone instrument. You can’t play the voices chromatically, at least on the current firmware. That said, if your ear is good enough, you can tune each step individually to create a bassline.

Changing the parameters for each step is simple too. You just hold the target trigger button and start turning knobs. It functions almost exactly like parameter locking on unabashedly modern instruments from the likes of Elektron. If you’d prefer to tweak things on the fly, you can just press record and start turning knobs to record automation. You can even change the algorithms and voice modes on a per-step basis, which really broadens the variety of sounds at your disposal in a given pattern.

The most important thing, though, is that Pērkons is an absolute delight to play. Frustrations with some of the interface aside, it lends itself towards live tweaking. And the hardware, just like with its distant sibling the SYNTRX, is incredible. The trigger keys on the right feel like they’re ripped straight from an IBM Model M. The individual step buttons have an insanely satisfying click. And the knobs have basically the perfect amount of resistance. All of this is in a large, metal body with wooden cheeks that feels like it was built for the express purpose of being abused.

All of that being said, I can’t simply recommend that anyone rush out and buy a Pērkons. It definitely caters to a particular audience. And its $2,059 asking price means you need to be really invested in that more aggressive aural aesthetic. While it does pack a lot of features and connectivity for the money, they’re definitely targeted more at a professional audience than the casual bedroom producer. But, if you’re looking for something rugged, wholly unique and powerful enough to explode a few heads with a thunderous kick, the Pērkons might be the perfect drum machine for you.